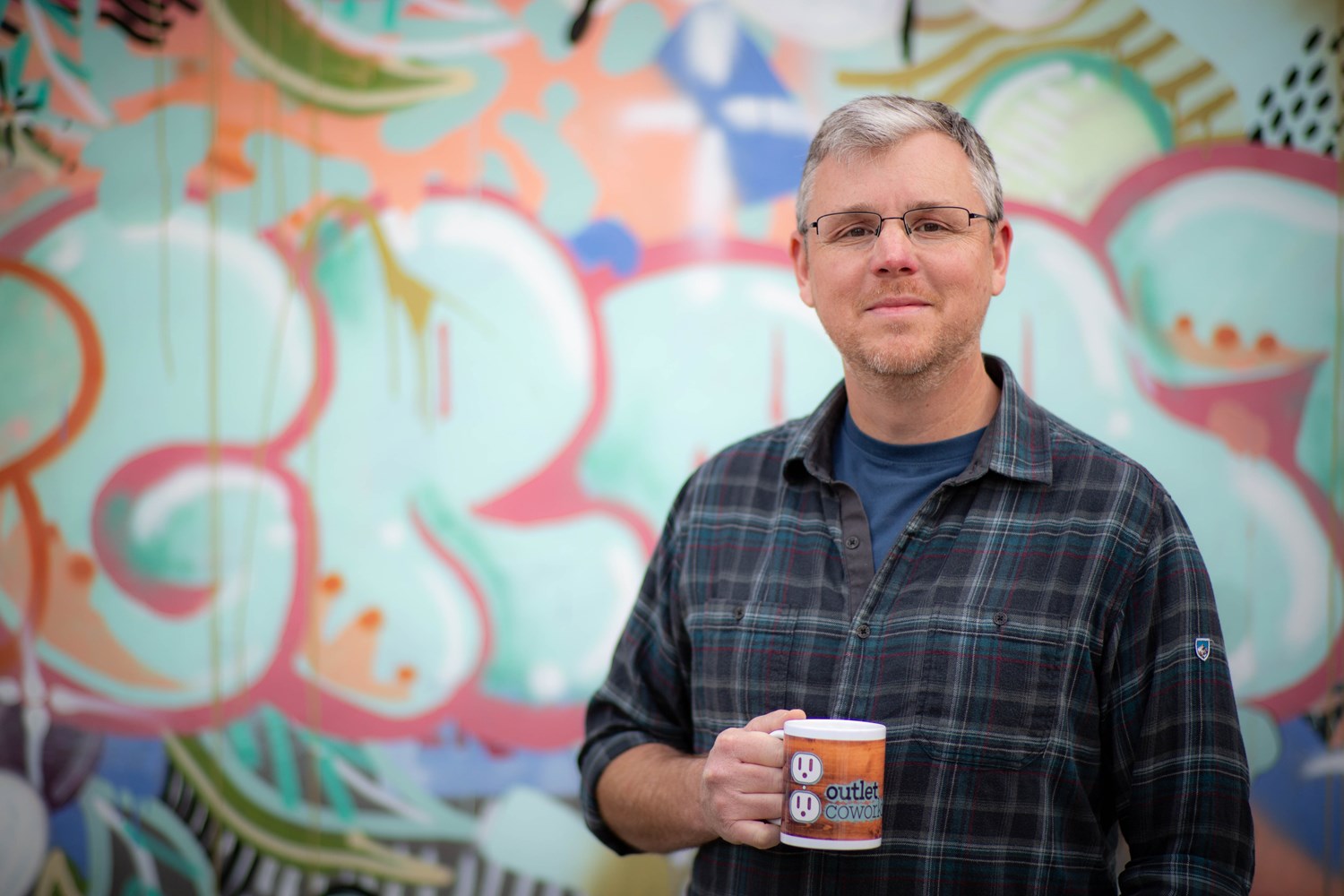 After we hung some of his striking photography in the front room at Outlet, I sat down with member Garrett Cotham to learn more about his work and career as a freelance photographer.  “I’ve always been interested in art, even when I was a little kid,” he tells me. “But when I was in high school I took a photography class which I just really took to. The first time I was in a darkroom and I watched the print come up in the chemicals it was like magic and just remember being blown away by it. I had no idea that's what happend. Since then I just took to photography.” Garrett enjoys both the adventure of getting out into the world to capture unique scenes as well as developing, printing and framing the work afterwards. “I just really enjoyed doing the work- capturing scenes, working in the darkroom, the blend of art and physical labor.”

Garrett specializes in travel and landscape photography, but he is quick to try out new concepts or techniques when the opportunity arises. “Mostly I try to stay open to learning about new processes. If something interests me to try to figure out either how to do it or read about it more, study it more and figure out how much it interests me. If I really want to pursue it.” Curious, I ask him about different techniques that he has tried out. “One thing a couple years ago that I got into was wet plate photography. I saw some work that just blew me away, it was really fantastic. Old school. Really old style like 150 years old. So I took a couple classes in San Francisco about how to do wet plate photography. It was really fun, I’m really glad I did it.” So, has he ever thought about switching specialties? “I’m open to learning new things but I always come back to the travel and the landscape things that I think are just closer to my heart,” he tells me.

At this point we move on to the question that every freelance artists worries about constantly- how do you make money? Garrett is ready with a quick quip, “if someone can tell me how to do that it would be fantastic.” We both share a laugh, then he then gives me his real answer, “I have done a lot work for Kaiser Hospital in South Sacramento, I have done work for a couple law firms here in town. Done some work for Pipeworks, the climbing gym, and had some shows up there also, and as well as a few publications around.” I then ask him about what the future holds, asking about the stereotypical ‘5 year plan’.  “I have no 5 year plan to speak of. Maybe I should,” he jokes, “In general I just keep plugging away trying to find places to show my work, to publish my work, just to get it out in the world and, little by little, it grows. And it has been growing for the last couple of years.”

We move on to the self promotion portion of our interview, when I ask him to tell me about what he has coming up. “Other than the show here at Outlet, which I am very happy to have, I don’t have any big projects upcoming at the moment but I do have work up in the world,” he tells me.  “I mentioned Pipeworks. If you ever go there in the bouldering area there is a large mural that is 9 feet tall by 27 feet wide. It's a panoramic shot of a place called The Buttermilks by Bishop. It is a popular climbing destination.” I tell him that I am familiar with his mural, since a close friend of mine regularly climbs at Pipeworks. Happy that I am familiar with his work, he tells me, “I love doing big stuff like that. If I could do huge mural prints and cover an entire side of a building with a photograph, that would be phenomenal.” He also tells me of some of his recent travels, and possible shows that could come from his work there. “A couple months ago my wife and I spent a month in Vietnam and it was phenomenal and I am hoping to do a show of Vietnam sometime in the coming year.”

Then I move on to talking about Sacramento. I start by asking how Garrett ended up here. “I grew up in the Bay Area. East Bay. But I came up to this region in ‘99 to go to school at UC Davis. Stayed there till about ‘05 or so and then went and traveled for a while,” he says.  “When I came back I just kind of landed here. I had some friends who had moved here and when I came back from traveling I didn’t have a job or place to stay so I stayed with them for a little while. I found a job here and shortly after is when I met my wife. We got together and I just ended up here.” I ask him what he loves about the city itself. He replies, “I always liked it, even when I lived in Davis. I would come up here for Second Saturday shows and see galleries and stuff. It's a great place to be.” When I ask him what he enjoys about it now he says, “the ease of Sacramento. It's not crowded like the Bay Area. It's not as busy. When it does feel busy, if I want to get out of here, you know, an hour, hour and a half and I can be up in the mountains. I can go hiking and be away from traffic and people and noise.” He continues, saying that, “it's also easy to get around. I live just off of Broadway and pretty much anywhere I need to go, I walk. I walk here (Outlet) all the time. It's just easy to get around. And great restaurants. Actually, phenomenal restaurants!” It's always the food.

Come see Garrett's art work in the front room at Outlet through January.