Nicholas Haystings specializes in “exposing underrepresented populations to STEM based experiences and education.” 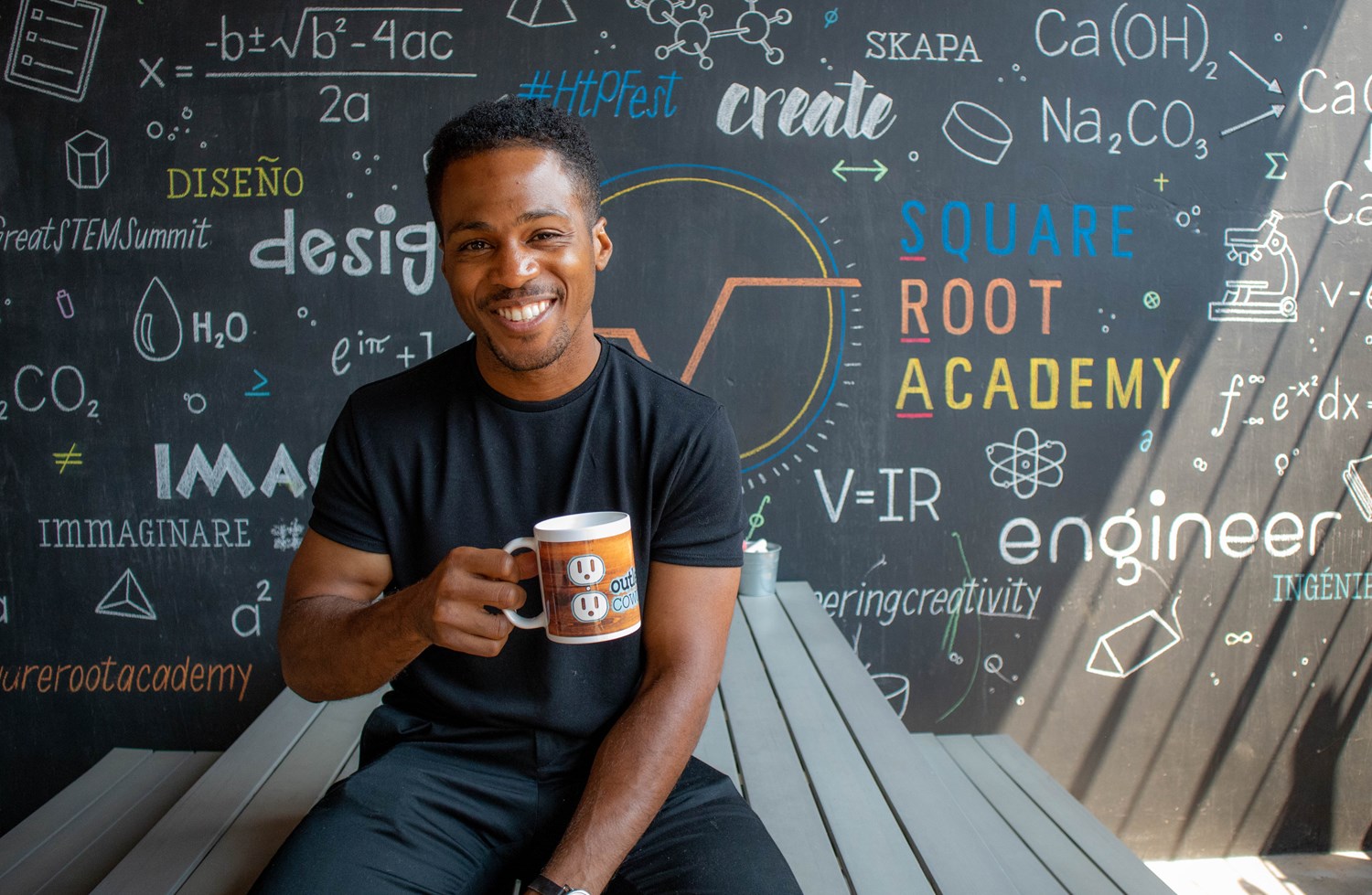 I first met Nicholas Haystings (Nick) about 2 years ago, when Square Root Academy was just getting started. At that time the organization was only was few months old and I would often find Nick and his co-founder Didier Mponte in their office till the late hours of the night and almost every weekend. Since then Nick and his team have made Square Root Academy a flourishing organization and he has been able to make his role as Executive Director a full time position. I now find myself sitting across from Nick at Outlet and I wanted to know more about how the organization got started and where it will grow from here.

I start out by asking him for the basics about Square Root Academy. “Our focus is to expose underrepresented populations to the fundementals of STEM through hands-on based learning. So that can be like hands-on 3D modeling, coding, laser cutting, things like that,” he tells me. STEM is an acronym for Science, Technology, Engineering and Mathematics and is used to describe those four fields of study. “Outside of that we have experiences as well such as our Hack the Park (HtP) Festival,” Nick goes on to say. The first HtP Festival was held in June earlier this year (2018) and consisted of many hands-on STEM activities. Nick tells me that they had almost 1000 young participants at the festival, saying, “That was a pretty good turnout, not bad for our first time.”

When I ask Nick about his inspiration for founding Square Root academy, he tells me that, “going into engineering when I was in college, there was no one there that looked like me. Then when I went to industry I discovered there was still nobody that looked like me. So there is a bit of a diversity issue in the STEM realm and the STEM industry. We wanted to do what we could to close that gap, to increase the number of diverse populations in the STEM realm. We figured that education was the best way to do that.” After personally experiencing the lack of diversity in STEM fields, Nick and his co-founders decided to make it their mission to tackle that issue. “I was an engineer before this. Primarily in the environmental engineering sector. It was great. I loved it. I met a lot of people and learned a ton there. But because of what I learned I am able to pass that knowledge on to our scholars. This is a different kind of rewarding, one that I think suits me a little bit better than being in industry.”

Nick is a Sacramento local, “I grew up here in Sacramento, South Sacramento in particular,” he says, “I did the whole route. Went to Charles Mack, Jackman, Valley High, and I ended up pursuing my undergraduate degree at Sac State.” Because of his personal history with Sacramento this community means a lot to him. “Sacramento is going through a bit of a change, and I wanted to make sure that certain populations don’t get left out of that change. So that's why I wanted to stay.” He says, “I remember growing up hearing people say, ‘there is nothing to do in Sac, its boring, it's this, its that, there is no opportunity.’ So I think that rather than continuing that same narrative we decided that we wanted to do something about that. That's why we are trying to stay here and do what we can for the city. That's what keeps me here, our desire to really do something for the city, do something positive and make an impact here.” That desire to improve his community is one of the things that makes Square Root so effective. “We relate to the populations we serve. We are reflective of the communities that we go to to provide this education. Not only that, but we are passionate about this. We are an organization comprised of geeks to make more geeks. That's pretty much our main goal is to really make the next generation of innovators. We are able to do that because we have the technical backgrounds to actually teach this stuff from a point of experience.”

So, what's next for Square Root Academy and Nicholas Hastings? “Through our partnership with PG&E we are now able to teach our scholars about solar (power). We are going to be running some solar coursework now and integrating that into our programming. Renewable technology, I think that’s very important. That scholars are learning the importance of the environmental impact that the technologies can have, and how we can create environmentally friendly technologies to create a more sustainable world.” He also begins to tell me about Square Root’s newest venture, Square Root Labs. “Square Root Labs is our facility dedicated to STEM equity and digital literacy.” This is where it gets awkward. Nick gives me and cautious look and continues, “It's also going to have some coworking in there,” he says. We share a laugh because this is not news to me. In fact, we had previously spoken about the intricacies of running a coworking space and I quickly assure him that these interviews are to promote our members and their ventures. Reassured, he continues, “So (Square Root Labs) is going to be opening in February of 2019. We are going to run our coursework there. Coding, 3D modeling in addition to some other things like soft skills in order to help kids get ready for the 20th century workforce. Also some digital marketing courses, like Photoshop, videography, just an overall digital literacy facility. We are excited about it.”

As always, I end my interview by asking Nick about what he personally loves about Sacramento. He has trouble trying to come up with a single thing so I tell him that a list is fine. “I’m a bit of a nerd so there are my stereotypical answers for Sac. There’s Coin-Op. I am a video game geek so I go out there and play some old school video games and get a brew or something. The Crocker is pretty dope, 2nd Saturday in the city and just going out and riding my bike along trail. Downtown is a very lively scene so there is always something to do around here. The city has plenty to offer, you just have to go out and just find what's right for you. There is a little something for everybody.” As a fellow local, I can't help but agree with him.

To learn more about Square Root Academy, Visit their website.