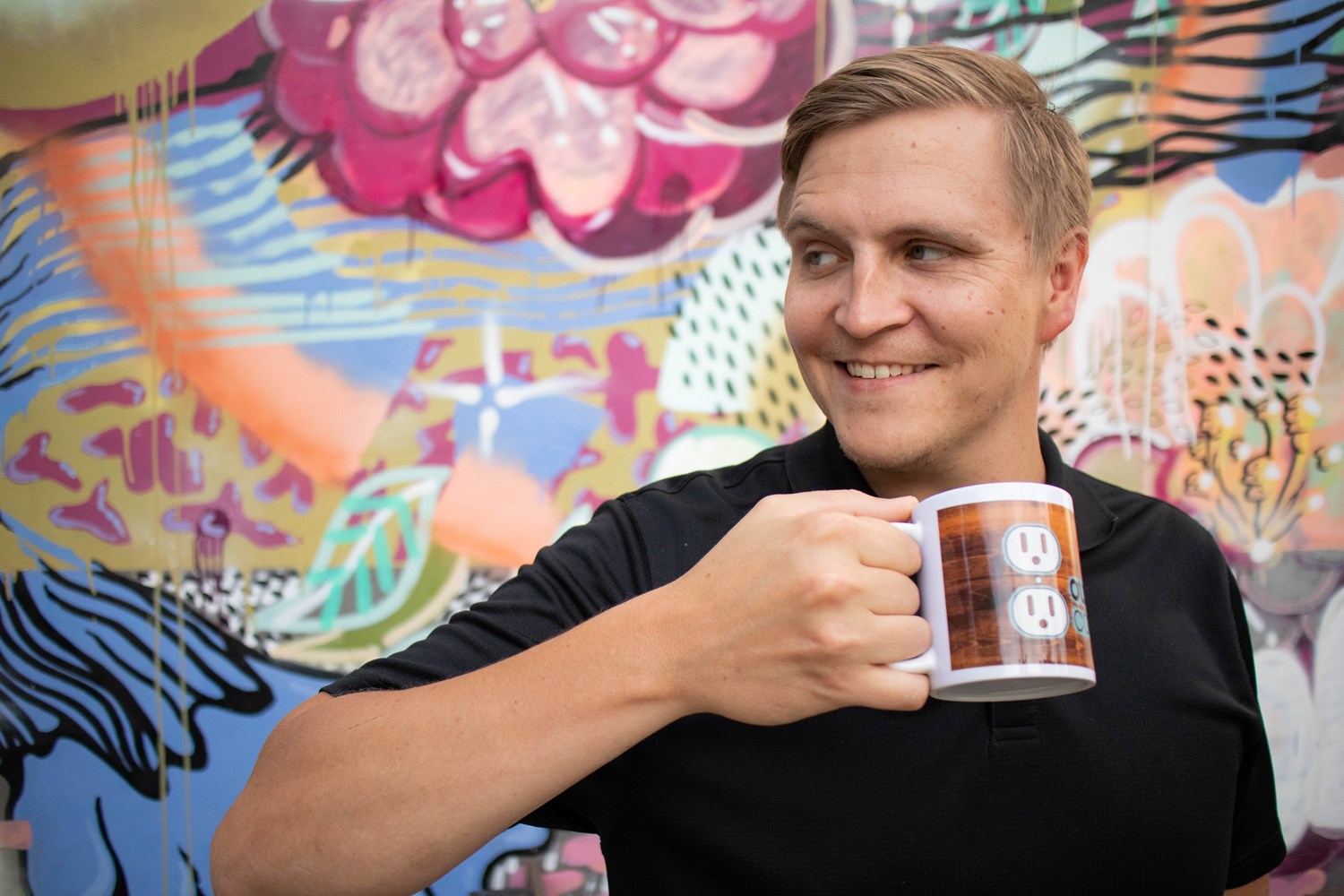 It’s late afternoon in July. After checking the conference rooms and the kitchen I find Scott Akers lounging in an adirondack chair in the courtyard at Outlet. With a smile on his face and a cold pint of Oak Park Brewery's Citra IPA in his hand, he says, “Let’s do this, I am ready to go.” His casual attitude, most likely originating from still being at work at the end of a long day, disappears as he quickly becomes all business. He begins to tell me about his new employer, Odem.io, where he works as a Blockchain Solutions Engineer. “ODEM is building a global on-demand education marketplace to help students and educators connect, conduct educational programs, and issue authoritative certificates using the blockchain.” he tells me. Despite the fact that we are close friends, Scott doesn’t talk about the specifics of his work very often, so I am interested to learn more as our interview continues.

Scott is a native of Sacramento. He attended University of the Pacific in Stockton, California for his undergrad, then went on to receive a Master’s in Technology Commercialization at the University of Texas in Austin. “I’ve been working in Education specifically since 2013 where I helped produce 2 massive open online courses in math and science and helped develop education application systems as a part of my graduate school studies.” He tells me, “those experiences really helped me understand the good, bad and ugly of the education system today.  Since then, I’ve been focused on working with people that are as passionate about education and finding routes to success that recenters and refocuses education around student success, not administrative overhead.”

Spending most of his time working as a contractor for seed stage startups and small businesses, Scott has learned a lot about what it takes to get an idea off the ground. “A large portion of building solid companies has been public awareness and education about products, processes, and tools that can improve people’s quality of life.” Scott is also no stranger to coworking spaces, having worked out of one while living in Texas, he was quick to join another when he returned to Sacramento. “I started coworking in 2012,” he says, “I travel a lot for work and don’t have the need for a full office.  Coworking gives me flexibility and consistency but what I really like is the chance to meet people in a community that are all working on different projects that can bring you inspiration from completely different industries and experiences.”

The conversation turns back towards Scott’s current employer, ODEM.io. “We are currently working on a project to help refugees repatriate their identity through their educational achievements.  It’s a very ambitious project, but we will be deploying our proof of concept very soon.” he tells me. Their goal is to allow refugees to recover their educational certifications after a forced migration. To put it in simpler terms, “to have a trained and talented chemist or mathematician working as a cab driver is a waste for society.” Scott explains. He thinks that ODEM has what it takes to fix this problem, “we’re going to be one of the top resources for international education.  In five years we expect to have a network of top universities and will be providing educational services to hundreds of thousands of students.”

As we finish off our beers and the interview starts to wind down, I ask Scott the obligatory question: What do you like about Sacramento? “Pretty much everything!” He exclaims, “Location is great, weather is great, coffee is great.” he goes on to say, “I’m a born-and-raised Sacramentan. I came back after living in Texas for a few years and it’s been really great to see how Sacramento has changed, and to see how it can improve!” He looks at the now empty pint glass in his hand and continues, “I hear we are fast becoming a powerhouse in the ‘beer-making world’. Some of the best IPA’s in the country, maybe the world, are being brewed in this region.” he says. Obviously the beer has a lot to do with it.

Learn more about ODEM.io and find Scott on Linkedin and Twitter as @scottmakers.